Please note that Colwell Arts Centre is currently closed. We will of course let you know when we are able to re-open. Any queries please email: glosmusic@gloucestershire.gov.uk and we will endeavour to deal with your enquiry as quickly as is possible during this challenging time.

We understand at these difficult times that some families will be finding payment of these invoices challenging, especially where you might have significantly reduced incomes. We do not want to let money be a barrier to your child continuing to learn on the instrument they have chosen and we have made funding available to support this. Please click here to complete the COVID-19 Instrument Hire Help form and email to mark.medland@gloucestershire.gov.uk

Celebration of Youth Choirs in Gloucestershire

On Friday 2nd June a concert was held at Cirencester Parish Church to celebrate the wonderful vocal talents of Gloucestershire’s young people and to highlight some of the opportunities available in our county for passionate singers. 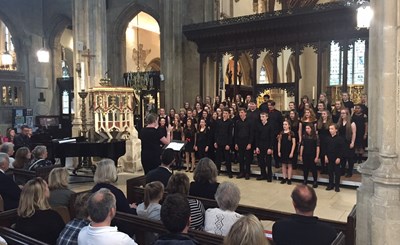 The event was organised by Gloucestershire Music and kindly supported by Cirencester Choral Society.  The concert followed on from the last two day course of the academic year for the Gloucestershire County Youth Choir (GYC).  The focus for this course was ‘musical theatre’ and the singers were treated to a workshop with Andy Coxon, who is a current shining light on the West End stages.  Every course we do has a different theme and allows our singers to explore different musical genres.

GYC’s members are aged between 11-18 and are nominated by Heads of Music, singing teachers, community choir leaders and parents.  Our aim is to have a fully inclusive choir which brings together the most passionate singers from every secondary school in the county.  We are 95% of the way there to reaching our target, which is very exciting!  The singers get to work with our professional team of tutors three times a year and we always give them wonderful performance experiences to follow every course. By the end of this academic year they will have performed at Cheltenham Town Hall, Tewkesbury Abbey, Birmingham Symphony Hall and the Royal Albert Hall!  Wow!  We also aim to bring in other inspirational artists to work with the choir and have recently worked with Robbie Jacobs (NYCGB) and Nathanial Morrison (West End Gospel Choir Leader and West End performer) as well.

This concert was a great opportunity for GYC to sing with some of the other top choirs in the county and we were delighted to be joined by the fantastic Beauregard Youth Choir (currently a Girls Choir) and Pate’s Sixth Form Consort (an a cappella group previously known as ‘The Grammatones’).  All three choirs have reached at least the National stage for Music For Youth (the largest youth music festival in the world!) and have various awards under their belt!  They bring with them something wonderfully different and exciting and the standard of singing is just amazing. 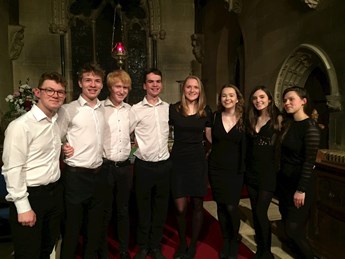 The concert had various items from musical theatre, such as The Circle of Life (Lion King), Defying Gravity (Wicked); classical items such as Ave Verum Corpus (Byrd); wonderful folk arrangements such as Danny Boy; jazz and gospel repertoire with gems like Ain’t No Mountain High Enough, Oh Happy Day and Minnie the Moocher!; and popular pieces such as Butterfly and God Only Knows.  The treats just kept coming for the audience!

We also had some wonderful items from smaller ensembles and soloists in the concert.  A real showstopper was the performance given by Oliver Carter (winner of the ‘Songs from the Shows’ category at Cheltenham Festival of Performing Arts and finalist in the Gloucestershire Rotary Young Musician of the Year competition this year).  Oliver performed ‘Smell of Rebellion’ from Matilda like a complete professional and certainly entertained the audience with his portrayal of the Trunchball!  We also had a solo from Nia Chittenden who has had a wonderful year of successes herself and proved why with her pure and effortless vocals she has secured her membership to the National Youth Choir of Great Britain since the age of 11!  Nia has also has just won the Gertrude Mace Shield in the Vocal Championships at the Cheltenham Festival of Performing Arts in May 2017.  Congratulations!

A highlight of the evening was also the two solos given by Andy Coxon – wow, what a voice!  He treated us to renditions of Santa Fe (from Disney’s Newsie’s) and Why God, Why? (from Miss Saigon).   It was so inspiring to hear how Andy had stuck with his dream to be a professional actor/singer and was encouraging parents to be supportive if this was the path their children wanted to follow.  We wish Andy the very best of luck for his new forthcoming role as Mitch in the London transfer of ‘Yank!  The Musical’ this summer. 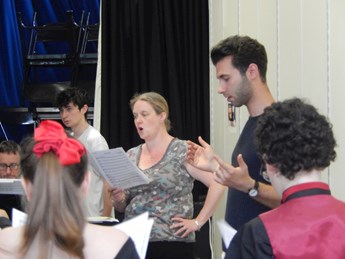 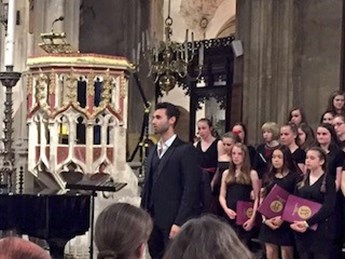 The audience were extremely positive at the end of the evening and there were many lovely comments:

‘A huge thank you for putting on such a great show.  It was most impressive.  The singing was top notch and of a very professional standard…the children were enjoying themselves and it was clear that the audience were delighted with what they saw and heard.’

‘I just want to congratulate you on tonight’s concert.  What a fantastic evening.  The singing from everyone was amazing and to have someone who performs in the West End and beyond to tutor them today and guide them is fantastic!  I’m obviously a gushing mum but what you did was brilliant.  Hats off to all of you that make this possible’

Singing is a wonderfully inclusive and uplifting activity and when it is done in an ensemble setting it brings benefits of friendship, community cohesion, positive wellbeing, as well as being musically fulfilling through the tonal blending of voices and challenges of singing in harmony.  Everyone should be encouraged to sing and if you are a little shy or unsure of your vocal ability then a choir is a great, safe training ground for all!

If you know of a young person who loves to sing then please contact us and we can point you in the right direction, as there are so many wonderful choirs and singing opportunities in this county that there will definitely be one that will fit the bill!  Email: admin@gloucestershiremusic.co.uk for more details or visit Gloucestershire Music's website

Did you find what you were looking for?