Entries from all over the UK are now invited for the 2017 Philip Bates Prize for Composers and Songwriters. 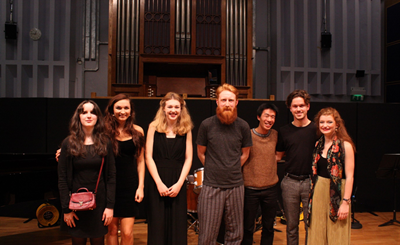 Composers between the ages of 16 and 25 may submit works in any style by Friday 29th  September 2017, the extended application deadline. Shortlisted entries will be given a public performance at the final on Tuesday 7th November, when the winning pieces will be chosen. Shortlisted composers must supply their own pre-rehearsed performers at the final and the chosen winners will receive a cash prize.

This exceptionally broad competition has recognised talent in a variety of genres in the past. It encourages entries in everything from classical, jazz and folk to singer-songwriter ballads, Asian music and rock, as long as the work is suitable for live performance and appealing to a wide range of concertgoers. Works should last between 6 and 12 minutes and should be for one or two singers / vocalists with between two and five instrumentalists.

Philip Bates, a young man from Castle Bromwich with a promising musical future ahead of him, was tragically killed shortly after his nineteenth birthday in March 2000. To honour his memory, the Philip Bates Trust (founded to encourage young musicians like Philip) and leading music college Birmingham Conservatoire (part of Birmingham City University) jointly run the annual Philip Bates Prize for Composers and Songwriters.

The competition offers three cash prizes, all donated by the Philip Bates Trust. Birmingham Conservatoire and the Philip Bates Trust award one £300 prize each. There is also a £200 prize awarded by the audience. Only one entry may be submitted per composer and entries should be sent or delivered to the First Study Administrator (Jazz, Composition, Music Technology) at Birmingham Conservatoire. Two scores of the work are required, plus a live or computer-generated recording (sound file, CD or memory stick). Entrants should also enclose a signed letter stating their date of birth, contact details and whether they have permission to use the text if it’s still in copyright.

Finalists will be announced by Friday 6th October.  An opportunity will be given for one of the prize winning works to be performed again at A Touch of Basil in September 2018, a concert organised by the Philip Bates Trust.

All submissions should be addressed to:

Did you find what you were looking for?